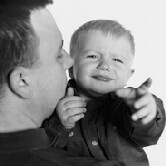 Numerous studies have focused on mothers with either post-partum depression, later depression, or both, and how it affects their bonding and relationships with their children. Researchers wondered if fathers’ depression has the same affect.

A new study looked at 200 couples with 3-year-olds and found that depression in either the mother or father during the first years of parenting increased a toddler’s risk of anxiety, sadness, hitting and lying.

“Parents who are depressed may not make as much eye contact or smile as much as those without depression. The more disengaged parents are from a child, the greater the child’s difficulty in forming close attachments and healthy emotions,” Sheehan Fisher, an instructor in psychiatry and behavioral sciences at Northwestern University Feinberg School of Medicine in Chicago, explained.

“New fathers should be screened and treated for postpartum depression, just as we do for mothers,” said Fisher, who conducted the study while at the University of Iowa. “If we can catch parents with depression earlier and treat them, then there won’t be a continuation of symptoms, and, maybe even as importantly, their child won’t be affected by a parent with depression.”