Getting Out With Toddler Multiples

Getting Out With Toddler Multiples

When all four of our babies were finally discharged from the NICU, I wondered when and if we would ever take them all out anywhere.  They were so fragile that fears of returning to the NICU were painfully apparent, and hard to shake.  As the babies grew and thrived, we began itching to take them places.  Part of the fun of having a new baby is taking them out to explore the world, right?   Aside from adventures, there’s always the reality of what must be accomplished outside the home, say grocery shopping and doctor’s appointments to name a few.

Our first few outings seemed like an Act of Congress.  With a new baby there are laundry lists of items to schlep along, and with multiples those items are multiplied.  We created lists of what was needed, checked then three or four times and usually forgot something.  Getting out with multiple infants is painstaking.

We’ve almost survived the first two years of life with quadruplets, and I’d wish I could say it got “easier”.  Of course, some things are easier.  Thankfully, bottle washing and reflux are a distant memory.  Plus, we’ve perfected many things through trial and error.  Getting out with the quads isn’t perfect, but we almost have it down to a science.  Nearly every time we take our family out somewhere, my husband groans during the process and asks why we wanted go anywhere.  I flash him a bright smile and remind him that we can’t be hermits and once we are actually out of the house we’ll enjoy ourselves (and we almost always do).

Any outing, from a well check with the pediatrician to a birthday party involves planning on our part.  LOTS and LOTS of planning.

With any outing, the timing is critical mass.  The babies always travel best when they are well rested, either in the morning or after they arise from nap.  We schedule any appointments first thing in the morning when the babies are happy, and before the waiting room backs up.  The idea is to get in and out as efficiently as possible.  For errands or play dates, we’ve learned that the babies do really well after nap.  If we are at home they typically become fussy during the afternoon.  Surprisingly, they are rejuvenated during that same time frame if they are in a novel place.  In fact, we enjoy play dates with other multiples most often in the early evening.   We also try to avoid public places during peak times.  For instance, instead of grocery shopping on a Saturday, we may go on a Thursday evening.

Next, we decide what to pack.  Keeping it light as possible is best.  With quads we obviously need more things than if we had only one baby,

but we try to pack the bare minimum.  After all, the four children are enough to manage; the last thing we need is unnecessary stuff.  For us, one standard size diaper bag generally does the trick.  In case of emergencies, we keep the stow and go compartments of our van stocked with extra diapers, wipes, and plain white onsies.  I may jinx myself, but we’ve never needed more than what was packed in our diaper bag.  Our diaper bag is always stocked with the essentials and ready to go at any time.  With the exception of more diapers, I think it’s about the same as what I’d pack for a single baby.  To avoid wrangling extra baggage, I don’t use a purse when we are out with the quads.  Instead, I stash a few things in their diaper bag.

I usually consider where we are going and what resources are available so I can avoid over packing.  For example, if we are going grocery 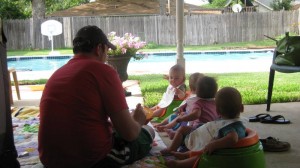 shopping, we hit our neighborhood store that has four seater carts, meaning we won’t need strollers.  (I admittedly stalk anyone returning one of these carts to the cart stall, and I feel as if it’s ours).  If we are going to a restaurant, we call ahead to make sure there are four high chairs available so we don’t need to bring our own seats or to attempt a meal without enough high chairs.

Going to a friend or family member’s house generally means we need a bit more.  If it’s mealtime, we bring our stackable booster seats and bibs.  I’ve succumbed to the fact that our children won’t likely nap away from home so I don’t bother hauling pack ‘n’ plays.  I do, however, bring a few novel toys (without detachable parts to lose) and a baby gate if there are open stairs.

Once we’re packed for our adventure, the next hurdle is getting everyone into the van.  We begin by changing everyone’s diaper (and pray that no one soils theirs after we’ve changed them).  Then we slip shoes onto everyone, as we corral them into our “holding area” in the den.  When the babies were infants, loading meant lining up infant carriers and snapping each baby into their carrier, carrying each seat to the garage and clipping them into the van.  With toddlers, we have a new game plan.  Once everyone is clean and wearing shoes, we lead the crew to the garage where they wait in line to be loaded into the van.  We start by loading the back passengers and then move to the captain’s seats.  If it will be a long ride, we sometimes dole out books, toys, or snacks to help keep the peace. 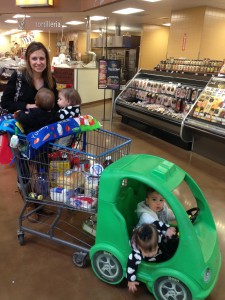 When we are going to a store, we first cruise the parking lot for a cart (or carts) to accommodate us and then park as close to the cart corral as possible.  Once parked, one of us grabs the cart and wipes it with Clorox wipes as the other begins unbuckling babies.

For places that do not have carts available, we either bring twin strollers or our Runabout quad stroller, which depends on where we are going.  The twin strollers are best for indoor venues whereas our quad stroller is great for outdoor treks.  With strollers, one person generally unfolds or detaches the strollers as the other gets babies from the van.

If we are headed to the home of a friend or family member, unloading is easy.  We make a quick phone call to our host, and solicit their help taking babies and gear inside.  Usually while others unload the babies, I dart inside and make quick baby proofing measures (e.g. clearing coffee tables, covering stairs, etc.)

Once we arrived at our destination, it would seem as if the mission were complete.  Not so quick.  It’s nearly impossible to travel outside the home with quadruplets without encountering stares, being asked gazillion questions, or over hearing all sorts of commentary.  In our experience, most people are kind, but even the nicest questions and comments can bring a family outing to a halt, which is not a good thing when you have four toddlers.  Well-meaning people don’t realize we don’t have 20 minutes to chat with them and answer all of their curiosities.  Consequently, we’ve perfected a few handy techniques: the grin and nod (e.g. acknowledge and keep going), the walk and talk, and the polite “thank you, we are very blessed” response.  In the instance of impolite onlookers, we are working on our thick skin and not letting strangers bother us.

Getting out with quadruplets is no easy feat, but we’re certainly learning tricks along the way to make it better.  And even though it can be taxing, it’s important that we go places as a family.

Amber is the mother of girl, boy, girl, boy quadruplets who made their debut in July 2012.  She shares her adventures with the quadruplets at www.FourtoAdore.com