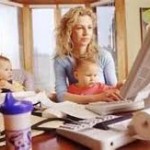 Research shows that PPD affects 10-20% of all new mothers and generally occurs within the first year following delivery peaking between 10-14 weeks. According to a 2003 MOST survey on PPD, PPD appears not only to affect a higher percentage of higher-order multiple birth mothers, 29%, but may occur at a later time, as late as 18 months to 3 years post-delivery, and go undiagnosed and untreated in a significant percentage of new mothers of multiples.

As you know, some women get diabetes when they are pregnant. Most of the time, it goes away after the babies are born. Even if the diabetes goes away, you still have a greater chance of getting diabetes later in life. Your children may also have a greater chance of being obese and getting type 2 diabetes later in life. Use this tip sheet to learn what you can do for yourself and your children.