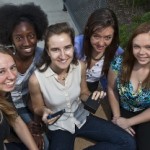 You may remember a previous article about Rice University students who invented a portable CPAP machine that fit in a shoe box. Now Rice students have invented another low-cost tool for NICUs in developing countries.

The BreathAlert device, originally designed in 2012 by engineering students as their senior capstone project, will be evaluated and optimized to detect and correct episodes of apnea in low-resource settings where traditional vital-signs monitoring is not available.

The work is part of an ongoing collaboration with pediatricians at Queen Elizabeth Central Hospital in Blantyre, Malawi, who identified the critical need for low-cost monitoring tools and have provided clinical guidance on the project, said Maria Oden, director of Rice’s Oshman Engineering Design Kitchen.

“Sixty seven percent of babies born before 32 weeks’ gestation suffer from apnea of prematurity, so that is well over a million babies a year, worldwide,” Oden said. “If a baby stops breathing in the developed world, an alarm immediately summons a nurse to intervene. That nurse will usually pat the baby vigorously to wake them up.

“In a busy ward where there might be 40 babies and one overworked nurse, this baby’s survival is really a game of chance. It relies on this nurse to observe the baby at the exact moment they stop breathing and intervene. BreathAlert was designed to detect and automatically intervene in cases of apnea.”