RSV: All Babies Get It, All Preemies Are At Risk

Home/Infant Multiples, Parents of Multiples/RSV: All Babies Get It, All Preemies Are At Risk
Previous Next

RSV: All Babies Get It, All Preemies Are At Risk 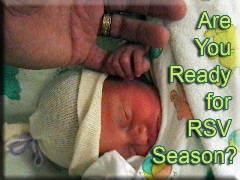 Kathleen Edwards shares her story of RSV and how it affected her babies.

Our bbbg quadruplets were born in the early hours of the morning on June 1, 1999. We had had a fairly uneventful pregnancy, and were thrilled to have each baby come into the world very healthy, despite being born at 31 weeks, 4 days. All were breathing room air, although Sage was placed on a respirator at some point during the first day because his breathing became shallow. Within 36 hours, he was taken off the respirator and appeared very healthy. We had a few of the common preemie problems, such as apnea and minor feeding issues, but they were never severe problems, and they all but disappeared within a few weeks.

The babies all came home within the month, and we followed all the typical preemie guidelines: Everyone must wash their hands upon entering the house, no children allowed to visit, etc. We passed through the first eight months of our children’s lives without even a sniffle. We were simply feeding them, loving them, and watching them grow. By February, even though it was still officially cold and flu season, we began to let our guard down a bit.

We brought them to a restaurant and to friends’ homes, and began to allow more people to visit. Looking back, I am not sure what we were thinking. Our NICU staff had told us about Respiratory Syncytial Virus (RSV) and the dangers it poses to preemies. Unfortunately, our insurance company had refused to pay for the costly Synagis shots, so we didn’t even have this to dampen the effects of RSV. I guess we had begun to relax too much, now that they were eight months old and healthy. I had even begun cutting back on my breastfeeding, as I was hoping to breastfeed part-time after nine months, giving me a little more free time.

On February 2, 2000, the children developed a cough. By the next day, they were congested as well. The following morning, they woke up again with some congestion, but we still didn’t worry too much. We figured we were just having the first, inevitable cold. By 11:00 a.m., however, the children were all running high temperatures, throwing up their food and having coughing fits. I was home alone and petrified. I called my husband and he rushed home so that we could bring them to the Emergency Room. There, our worst fears were confirmed: All four babies had RSV. We knew RSV symptoms could come on fast, but we were just blindsided with how quickly the children went from simply congested to very ill! Three of the babies were sent home after an albuterol nebulizer treatment and steroids, the fourth, Connor, had a chest x-ray that determined he had developed pneumonia, and he was admitted to the hospital. In the morning, much to our relief, the doctors told us we could bring him home. He seemed much better. All the babies did, actually. We thought we had seen the worst of it, and settled down at home with some family members to help out. By noon, we were back in the Emergency Room with Cheyenne and Dakota. They had suddenly become very listless and were having breathing problems.

Again, after some chest x-rays and nebulizer treatments, they were sent home. The following morning will be burned in my brain forever. None of the children slept well that night, nor did we. By 5:30 in the morning, we had decided to give up on trying to sleep, and we got the babies out of bed. Two of them could hardly even move. They just lay on the couch with their eyes barely open, and they were burning up. The other two nibbled at their bottles for a few minutes, then threw up and stared at the walls with a glazed look in their eyes. We brought the babies back to the emergency room in a panic and with tears in my eyes, and begged them to admit the babies to the hospital. We simply could not take care of them at home anymore. Ironically, the one child who had been on a respirator at birth, Sage, was the one least affected by the RSV. The doctors’ repeatedly told us that he wasn’t really sick enough to be hospitalized, but being an hour away from home, they realized admitting him for observation with his siblings was necessary for everybody’s peace of mind.

The hospital separated them, two to a room. Me and my husband, Roy and each set up camp in a room. We barely saw each other for the next three days even though we were right next door to each other. The babies were on 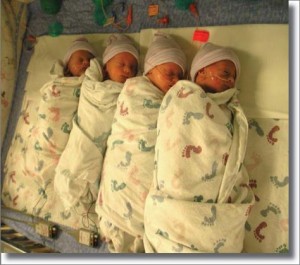 albuterol nebulizer treatments every two hours around the clock, respiratory monitors were going off every 20 minutes, and babies were crying out of hunger and pain. It was the worst three days of my life. The fact that I had developed one of the worst colds I had ever experienced and found myself completely exhausted didn’t help. I was frantically trying to keep up with pumping so that the babies could have some breast milk to help them through their illness, but each day I produced less and less. Even though I knew the illness and lack of sleep were affecting my milk supply, I felt as though I was letting the babies down. Giving them breast milk was the one thing I thought could do to help them, and my body was, for the first time, failing me. Roy was working double time trying to take care of the babies and make sure I didn’t pass out from fatigue. What a way to spend a week of his much-coveted vacation time!

The children very slowly recovered, but my milk never did. I finally gave up and stopped pumping within two weeks. The children were sent home later that week on nebulizer treatments and instructions to keep them away from anybody who was sick. We decided to quarantine them in our house and turned away all company. Unfortunately, the story doesn’t here. Within two weeks, even with all our pre- cautions, the children came down with a cold, which sent Dakota and Cheyenne back into the hospital. They were on oxygen this time in addition to the nebulizer treatments, and they both appeared even sicker than they had the first time. Roy and I felt such an ache in our hearts. Our poor children didn’t deserve this. They had defied the odds and been so healthy as preemie infants, it didn’t seem right that they had to be so sick now.

Everyone did eventually become well again. We kept using the nebulizer for the next two months as a preventative, per doctor’s orders. As if it wasn’t busy enough in our house, now we had to fit in five nebulizer treatments per child every day. Again, however, the story does not end there. The following September, when the babies were 15 months old, they came down with their first cold of the season. It was immediately apparent that something was wrong with Dakota’s lungs. He wheezed constantly, coughed all night, and was sick for weeks after the others had recovered. Our pediatrician assured us that with nebulizer treatments and occasional steroids, he would be fine. What had more than likely happened, he said, is that the RSV complications had damaged Dakota’s lungs. He would grow out if it. This explanation, however, does not make it any less frightening when Dakota coughs so hard that he throws up and wheezes so loud we can hear him breathing all the way across the house. Although the nebulizer does help, we are now in the process of having Dakota seen by a pediatric allergist. We decided that instead of simply waiting for them to “grow out of it”, we needed to make matters into our own hands and make sure that we are not overlooking a larger problem. The children also received Synagis shots this past RSV season, after a summer-long battle with our insurance company to cover them.

The shots are so expensive that it actually costs quite a bit less to have all four of the children hospitalized for a week than to have them receive Synagis vaccinations for one season. The insurance company actually had the audacity to point this out to me as a reason to not cover the vaccinations. I can assure you that “customer service representative” heard an earful from me after that conversation.

We still dread every cold the children come down with, fearing they will become very ill again. The Synagis and the fact that they are almost two years old now reassures us a bit. I know that the older they become, the less threatening RSV will be for them. I have made it my quest to educate my friends who haven’t even heard of RSV as to the dangers it can pose to a baby born premature or with lung complications. Friends who had their full-term babies diagnosed with RSV are the hardest to convince, as their babies “just had a cold.” They don’t understand how a baby could suffer such severe complications from a cold. Roy and I were, in a way, fortunate. We know people whose children have been lost to RSV complications. Our story is definitely not one of a worst case scenario, but rather one which will hopefully make other parents of preemies more aware of the dangers of RSV.

On a brighter note, we discovered that the cold I had when the children were hospitalized wasn’t entirely to blame for my exhaustion. When my cold went away but the fatigue didn’t, I went to my doctor and discovered I was expecting! What a delightful surprise! It gave new meaning to the phrase “’every cloud has a silver lining.” We felt we had just weathered a terrible storm, and this was our bright spot that followed. Within a day of his due date, we gave birth to a beautiful baby BOY named Arizona Alexander. That, however, is a completely different (and happy) story…