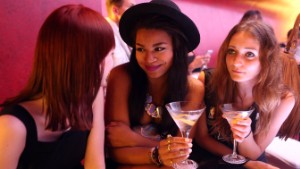 Many parents allow their kids to take a little sip of their beer or wine from time to time, but it’s not a good idea according to a new report.

The study involved surveys of 561 middle school students in Rhode Island over a three-year period. A little under a third of the students said they had sipped alcohol by the start of middle school, with most of those saying they got the alcohol from their parents at a party or on a special occasion.

Even when factoring out issues that could encourage problem drinking down the road, such as how much their parents drink, a history of alcoholism in their family, or having a risk-taking personality, the children who sipped were more likely to be drinking in high school, said Kristina Jackson, research associate professor at Brown University’s Center for Alcohol and Addiction Studies, and one of the study’s authors.

“I think the most important thing is to make sure that children know when drinking alcohol is acceptable and when it is not,” said Jackson. “I would say that it is advisable not to offer your child a sip of your beverage, as it may send the wrong message — younger teens and tweens may be unable to understand the difference between drinking a sip and drinking one or more drinks.”