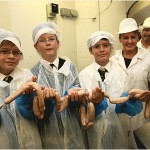 Triplets have come up with a sizzling sausage recipe that will feed their school pals.

Nine-year-olds Archie, Charlotte and Flynn Roberts were invited to see their creation – the “Ardingly Tripolata” – produced after designing a recipe to mark British Sausage Week.

A competition was held at their school, Ardingly Prep, where pupils were challenged with dreaming up a new flavour of sausage. Their winning entry was then created by Lingfield butchers’ CMB Foods and will be added to their school menu.

Each team of would-be chefs gave a presentation to explain why they had chosen the ingredients they had and it was left to headmaster Chris Calvey to pick the tastiest. But you won’t be able to recreate the winning recipe – as the triplets are keeping some of their ingredients a secret.

Archie said: “We had a fantastic couple of hours learning the process of sausage making. It was epic! It is amazing to think that we have created new sausages.” Charlotte added: “When we held the first sausages to be finished they were so slimy.” Pupils at Ardingly College got their first taste of the winning sausages on Friday.

The college’s catering manager Jo Davis said: “The triplets produced a poster describing their sausage which was a work of art. It was hand drawn and it featured a picture of a sausage wearing a hat and holding a spoon and it concluded that it was ‘probably the best sausage in the world ever.”

“They had grand plans containing hard-boiled egg and for it to be wrapped in bacon as they wanted an all-in-one breakfast sausage. However, it had to be a bit simpler when it was made. They all sat around the kitchen table and decided upon the name and ingredients together. The prize was not known to the children until they found out they had won.”