Want Your Kids to Eat More Veggies? New Study May Have the Answer

Home/Parents of Multiples, School-Age Multiples/Want Your Kids to Eat More Veggies? New Study May Have the Answer
Previous Next

Want Your Kids to Eat More Veggies? New Study May Have the Answer 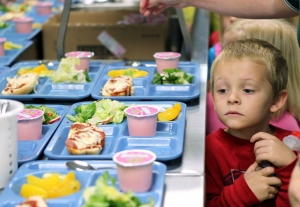 It’s an age-old problem: kids not eating their vegetables. Nine out of 10 children still don’t eat enough vegetables, according to the CDC.

In an effort to try to fix the problem the government updated its nutrition standards for the National School Lunch Program in 2013. It hasn’t worked. Children, suddenly confronted with vegetables on every plate (required as part of the change), have responded not by eating them, but by leaving them on their plates untouched.

Researchers at Texas A&M University, looking for patterns in food consumption among elementary school children, found an interesting quirk about when and why kids choose to eat their vegetables. After analyzing plate waste data from nearly 8,500 students, it seems there’s at least one variable that tends to affect whether kids eat their broccoli, spinach or green beans more than anything: what else is on the plate.

Kids, in short, are much more likely to eat their vegetable portion when it’s paired with a food that isn’t so delicious it gets all the attention. When chicken nuggets and burgers, the most popular items among schoolchildren, are on the menu, for instance, vegetable waste tends to rise significantly. When other less-beloved foods, like deli sliders or baked potatoes, are served, the opposite seems to happen.

The effect can also work the other way around. The study found that children tend to eat less of their entree when popular vegetables (mostly starchy fried vegetables, like tater tots and french fries, which many wouldn’t classify as vegetables) are offered. When the entree is paired with steamed broccoli — the vegetable children eat the least of on average — kids instead eat more of the main dish.

And that interrelationship can be useful in reducing the amount of food wasted at schools, which has been a persistent problem.

But these observations are probably more useful as a gauge for how appetizing vegetables are in different contexts than as a subscription for what pairings will lead to the least amount of food waste. Kids’ favorite meals, after all, aren’t particularly healthy. What’s more, they, too, lead to considerable waste. The most popular pairing — hamburger and tater tots — still results in about 26 percent waste on average, according to the study.

The notion that food pairings can significantly affect the attractiveness of certain foods isn’t new. Traci Mann, who teaches psychology at the University of Minnesota and has been studying eating habits, self-control and dieting for more than 20 years, believes that it can, in fact, be crucial. One of the simplest ways to eat better is to make it easier to eat better. That involves a strategy Mann calls “get alone with a vegetable,” which is similar in that it shows how important context can be.

Normally, vegetables will lose the competition that they’re in — the competition with all the other delicious food on your plate. Vegetables might not lose that battle for everyone, but they do for most of us.

This strategy puts vegetables in a competition they can win, by pitting vegetables against no food at all. To do that, you just eat your vegetable first, before any of the other food is there. Eat them before other food is on your plate, or even at your table. And that way, you get them when you’re hungriest and unable to pick something else instead.

Of course, persuading schools to serve vegetables by themselves could be too tall a task. Asking them never to serve foods kids adore might be, too. But understanding how something as simple as what a vegetable is served with can have a sizable impact on whether a child eats it is a pretty useful thing. At school, and at home.

Adapted from an article by Roberto A. Ferdman.