5 Things You Should Never Say to a Parent of Multiples

5 Things You Should Never Say to a Parent of Multiples 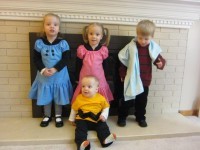 Jill Covyeou is the mother of triplets and a younger singleton.  She is an Associate Professor of Clinical Pharmacy at Ferris State University College of Pharmacy.  She has been a MOST member since 2010.

A few months ago I was approached by a colleague to write an article for a publication from a state pharmacy association.  The article would appear in their “New Practitioner Exchange” publication, which is more of a lifestyle magazine for pharmacists in their first 10 years after graduation.  The guidelines I had were: about 1 page long, and it can’t be anything related to pharmacy.  I had agreed to write the article, but I was at a loss!  I am accustomed to writing about mediations, patient counseling, and disease states.  Ask me about prescription drug abuse and I can talk for hours.  (I literally have several lectures on the topic that would total about 3 hours in all.)  I was totally unprepared to write a book or movie review, share an exciting vacation spot, or teach readers a new hobby.  For goodness sake, I have 3 year old triplets and a 1 year old baby, I don’t have time for any of that!  That’s when I remembered the old adage “write about what you know”: multiples.  I think we can all agree that that there are just some conversations about multiples we wish we never had to have again.  So, in the interest of public education, I wrote a set a guidelines for talking with parents of multiples.  I didn’t get everything, but I got my top five.  I hope you enjoy it!

“Ummm, there are three babies here.”  This is not the ideal way to tell parents that they are expecting higher-order multiples but, to be fair; I think the doctor was just as surprised as we were.  As the mother of triplets I have had to face challenges and overcome fears.  One of these challenges is dealing with the questions and comments of strangers (and sometimes friends).  Normally I love talking about my kids (like any parent) but there are certain situations and specific comments that really irritate me (and most parents of multiples).  The following are the top 5 things you should never say when talking with a parent of multiples.

Number 5:  “Oh, I would LOVE to have twins, it would be so FUN.”  I’m not saying that I would take any of it back (well maybe the day that everyone in the house except for me got the stomach flu).  I love my family just the way it is.  However, telling a parent of multiples that you would love having twins or triplets because it sounds like so much fun is like telling a war vet that combat seems like a really exciting way to see the world.  “Sufficient unto the day is one baby. As long as you are in your right mind, don’t you ever pray for twins. Twins amount to a permanent riot. And there aren’t any real differences between triplets and an insurrection.” ~Mark Twain

Number 4:  “Are you done now?”  I imagine this question irritates parents of any large family.  It seems, though, that many people expect parents of multiples to be “done,” especially if they have children of each sex.  This is a very personal question and unless you are very close to the person, not something that you should ask.

Number 3:  “Do twins run in the family?”  Maybe you really want to know this specific question, but most often it is a thinly veiled attempt at determining if this was the result of infertility treatments.  This is a very sensitive and personal subject to many people so unless you are close friends with the parent, it’s better not to ask.

Number 2:  Stop us in the store.  When you see a family with multiples in the store, don’t stop to tell them how your sister’s friend’s cousin also has triplets.  Now, generally, I am more than happy to discuss my kids and how “Yes they are triplets,” “No the boy is not identical to the girls,” and “Yes my house is hectic.”  However, if they are all with me and we are out grocery shopping we have a very small window before someone inevitably has a meltdown.  Last year we went out to lunch with my mom and she was amazed at how people thought they should just come up to us to chat about the kids and comment on how I was pregnant again.  “Don’t they see you have 3 two year olds to feed?”

Number 1:  “My kids are 11 months apart so it’s just like having twins.”  I may smile and nod, but really, I just want to slap you.  This is by far the most irritating thing that people have said to me.  Having two newborns is NOTHING like having kids 11 months apart.  Caring for two newborns is both physically and mentally exhausting.  The developmental differences between a 1 year old and a newborn are enormous.  One of the best days in the triplet’s first year was the day they could feed themselves Cheerios.  That meant that I didn’t have two hungry babies crying while I tried to feed the third one.

Are you replaying past conversations in your head and realizing that you fell into one of these categories?  Don’t worry, as a parent of multiples I know that people are generally just very interested and can’t help all the questions they ask.  Just keep in mind that time is a very precious commodity for a parent of multiples and if you have a question, chances are they have had to answer that same question hundreds of times before.  Stick to things you would normally say to a parent of a singleton, like “Oh, she’s so cute!” “How old is he?” or “You have a beautiful family” and you will be fine.  If you would like to see a much more humorous take on this topic, go to “Moms of Multiples are Freaks of Nature” on youtube.  It is surprising how close this is to actual conversations I’ve had with complete strangers.