Coping with a Diagnoses-Our Story

Coping with a Diagnoses-Our Story 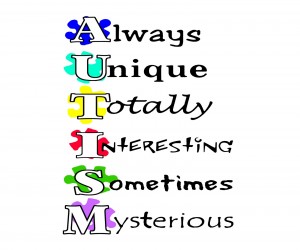 Jeanette, mom of triplets, shares her experience of having all three children diagnosed on the autism spectrum.  She shares her emotions and coping through those first few years.

My husband Chris and I were lucky enough to have relatively healthy 30 week triplets Rachel, Kirsten, and Dylan. We went through the “normal” preemie problems, and thought that we were home free when they reached 1 year of age hitting most of their developmental milestones. Little did we know what we were in for!

At 14 months none of the children had started to do any more than basic babbling. So after much haggling with our pediatrician, who said to leave them until they were two as triplets could be expected to be late developing, we arranged to have the children seen by a developmental pediatrician. After a two-hour visit with him he told us that yes, we definitely needed speech therapy, and oh, by the way, did we realize that all three children had autistic tendencies? I felt like I had been kicked in the stomach. We had happy, affectionate children who never even conceived of sitting in the corner rocking and banging their heads, so how could they possibly have autistic tendencies? After being referred to a local early intervention program we walked out of his office in a daze, and the fun really began.

I have always relied heavily on the Internet for information, and as soon as we got the children into bed that

night I raced online to see what I could find. There was lots of information on autism, most positive, some horrendously depressing. Because I had never met a child affected by autism before, I envisioned all of our children growing up in an institution or at best a group home, and it was more that I could bear. For about a week I felt like my children had died. Every time I looked at them I burst into tears. I couldn’t bear to be around “normal” children even if they were just sitting doing nothing. All I could think was that my children would never be like them.

When someone first mentioned the word autism in relation to my children, that the first thing I had to do was let go of my dreams of a “normal” family, and learn to concentrate on new dreams. This was not an overnight process. I think this proved especially true since I was already stressed from managing multiple birth children and found it extremely difficult to give myself time to grieve. Looking back I feel it was important to get the grieving over with. It still comes back to some degree at times, but the initial shock and grief did wear off.

Along with my grief for my “normal” children came an incredible amount of anger. Towards whom or what, I’m not sure. It just wasn’t fair that all three of my kids were affected by autism! I was well educated about the risks of higher-order multiples, so I knew the possibility that my children might be affected by long-term special needs was there, but it seemed beyond belief that all three of my children would be affected. I’ve since come to the conclusion that fairness has very little to do with anything, this is just how things turned out. Along with the general anger at the universe came a lot of specific anger. I hated anyone with a “normal” child. I hated my family who kept saying, “they will be just fine”, or “they don’t look autistic to me”. I was angry with my husband because it took him longer than me to get used to our new life, and I was angry with the professionals who wanted me to do all of these therapies without realizing that there were three children to consider, not just one. Fortunately over time the anger has gone away, but I don’t think anyone should feel ashamed or guilty if they are angry for a while, as long as they don’t take it out on their family.

When I was ready to pick myself up again I began to learn some very interesting things about autism. Most importantly I found that there is a huge range or “autism spectrum” of differing symptoms, abilities, and challenges. Some children fit the general perception of autism like the character from the movie Rainman, but most do not. Some children have very few symptoms that are visible unless you know what you’re looking for. Considering this fact, I feel that it’s best not to despair right away. Another thing I learned is that there is a range of early intervention treatments and therapies available today, so it is very hard to predict at a young age what a child affected by autism might be capable of. Much of the literature I came across dealt with children or adults who were diagnosed more than five years ago, so it’s likely that the prognosis for child along the Autism Spectrum today could be much better. I was also happy to learn that many, many of these children can grow up to live happy, independent, productive lives.

As time has gone by (two years since we first learned our children were affected by autism), I’ve found that the moments of grief have gotten further and further apart. Birthdays and anniversaries are still difficult, and sometimes so is being around typical children. It still hurts sometimes to see my children with their peers and realize that there are such huge differences. But there have also been more joys that I ever thought possible. I guess when your children have greater difficulties reaching milestones, you really celebrate them a lot more than other parents. Hearing my son learn to say “Mommy” after months of speech therapy is something that I will never forget. I am just in awe of my children. Watching them learn and grow in spite of difficulties that would stop most people is inspiring. I would not trade them for anything!

I think the emotions experienced by parents of a child with special needs were even more magnified for me since I had multiples, all of whom have special needs. Had one or more of the multiples not been affected, I suppose I would have had to deal with the constant pain of comparison because their same age sibling(s) are always right there. This too would have been a difficult thing to deal with because as a parent of multiples we usually expect multiple birth children to develop many of the same skills at the same time. In some ways, I think having a child affected by autism who is also a triplet, or more might even take away one of the best advantages to being a parent of higher-order multiples, no longer being able to say “At least they have each other to play with!” But I also think that this situation could have an advantage over a single birth child affected by autism, as multiple birth children have sibling peers who can help to teach them social interactions just by their presence, and the normal give and take that comes with siblings. Multiple birth children might also have the advantage of earlier diagnoses and therefore treatment, since many are already involved with an Early Intervention Program.

Shortly after the children turned three, and after almost two years of therapy, they were all officially diagnosed with Pervasive Development Disorder (PDD). Even after two years it was still a shock to see it actually written down. Up until then I think that I was hoping the doctor would say “Oops, we made a mistake-they were really just delayed.” I had a good cry that night, and then went on with life again. All in all, I wouldn’t trade my children for anything, even for the same children not affected by PDD/autism. The disorder is part of who they are, and along with the horrendous grief and anger in the beginning have come the moments of incredible happiness and joy. It’s not easy, and there will always be “down” times, but I’ve learned that it’s important for me to recognize that I am allowed to be down sometimes, and that things will always look up again in the future.

Jump Right In! Parenting a Child with Autism  A mother’s story

Autism in the Classroom (WebMD)

M-CHAT(Modified Checklist for Autism in Toddlers) An autism screening tool designed to identify children 16 to 30 months of age who should receive a more thorough assessment for possible early signs of autism spectrum disorder (ASD) or developmental delay.