Researchers at Brown University and Women & Infants Hospital have developed a machine that can analyze babies’ cries and make it easier for physicians to identify neurological or developmental issues in children. 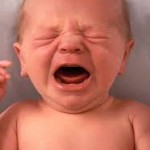 “Slight variations in cries, mostly imperceptible to the human ear, can be a ‘window into the brain’ that could allow for early intervention,” a Brown University spokesman said. “We’ve known for a long time that older individuals with autism produce sounds or vocalizations that are unusual or atypical,” said Brown University professor Stephen Sheinkopf, who was a part of the team that developed the tool, “so vocalizations in babies have been discussed as being useful in developing early identification tools for autism. That’s been a major challenge. How do you find signs of autism in infancy?”

The machine works by simplifying the recorded cries into 12.5 millisecond frames and analyzing each frame with a minimum of 80 parameters.

The research stems from a disorder called Cri du chat (cry of the cat) syndrome, an offshoot of a genetic anomaly similar to Down syndrome. Babies who suffer from it have a distinct, high-pitched cry.

Blog articles: Jump Right In! Parenting a Child with Autism and On the autism spectrum? Poll results April 2012