Is Silence Golden in the NICU?

Home/Multiples in the NICU, Preemies, Special Needs/Is Silence Golden in the NICU?
Previous Next

Is Silence Golden in the NICU? 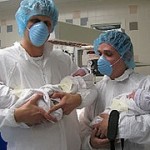 In the NICU was it quiet or noisy? Were your babies in private rooms or not? Keep reading to see what research is showing about the amount of noise beneficial.  Does this apply at home also?

In the NICU, maybe not all silence is golden. A study published in The Journal of Pediatrics provides new insight on the pros and cons of private neonatal ICU (NICU) rooms. “Current practice tells us that we should minimize the amount of stimulation to the baby, so you would think that babies in private rooms would do better – but we found the contrary,” said the study’s first author, Bobbi Pineda, PhD, of Washington University.

The observational study used comprehensive neurobehavioral testing and brain imaging with MRI. At discharge, preterm infants in NICU private rooms tended to show abnormalities in the structure of the brain’s language area compared to those cared for in open wards. And at age two, those who had been hospitalized in private rooms showed poorer language skills.

Even controlling for multiple contributing factors, the association persisted, raising questions about sensory exposure and suggesting the need for more research on optimal NICU environments.    Courtesy of NPIHC