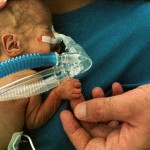 If you had a premature infant in the NICU did you talk with anyone about your experiences while in the NICU?  This study found mothers had  lower anxiety  and depression after speaking with NICU nurses. Could this have helped you?

A recent study by researchers at the University of Iowa Children’s Hospital found that mothers who had one-on-one sessions with neonatal intensive care unit (NICU) nurses after having a premature birth decreased their anxiety and depression symptoms and improved their self-esteem.

The study, published online in the journal of Perinatology, included 23 participants who received an average of five one-on-one sessions that lasted approximately 45 minutes each. The mothers were given the option of choosing the setting: their room, an outdoor patio, or the cafeteria.

The mothers were asked to fill out a Quality of Life, Enjoyment and Satisfaction Questionnaire before and after the one-on-one sessions. The participants reported an overall better sense of self-esteem and a more positive outlook on their situation. The researchers also did a follow-up assessment a month after the last session to evaluate the effect that the sessions had on levels of depression and anxiety.

The researchers noted that the sessions helped the mothers to focus on themselves and their needs. The majority of these mothers often felt that their needs were trivial in comparison to the struggles that their preterm babies face. Read more.