Kindergarten – To Separate or Not? One Family’s Experience

Home/Parents of Multiples, School-Age Multiples, Testimonials/Fund Raising/Kindergarten – To Separate or Not? One Family’s Experience
Previous Next

Kindergarten – To Separate or Not? One Family’s Experience 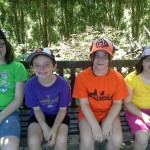 My triplets are third graders now, but when they were in preschool we faced the question of whether they should be together or in separate classes for kindergarten and beyond. From the time they were infants, I had felt that we would probably try to keep them together to ease the transition into kindergarten, and then separate them after that. I kept an open mind, however, and paid attention to my children’s developing personalities, strengths, and needs. I also did some research into the subject, reading about other families’ experiences. I read MOST’s statement of their position that it should be a joint decision of the school personnel and the family. As a teacher, I believed that the “right” choice is different for each family, based on their children’s situations, as well as things like school size and the logistics of grouping.

When the final year of preschool was underway, I talked with my kids’ teacher, asking whether they got along in class, if any of them seemed dependent on a sibling, if they played with other kids. The teacher said my trio occasionally played together, but usually chose to play with other friends in the class. They got along with each other, but were fine independently as well. My husband and I felt that keeping them together would make kindergarten easier for all of us. Five-year-olds have a hard time understanding why they have more homework than their sister, or why only one of them was invited to a party. Communication with just one kindergarten teacher was another thing that appealed to me.

Having heard that the administration believed multiples should be separated, we “did our homework” so we would be able to present solid reasons for wanting our children together in one class for their first year. Our request was granted, and I feel it was the best approach for our family. After kindergarten, the kids were placed in separate classes, a decision we approved. For our children, it was important for them to gain some individuality in separate classes. Our daughters look very much alike, so we didn’t want them hearing, “Which one are you?” every day. Our son needed the opportunity to be his own person, not to have his sisters jump in and speak for him before he had a chance to decide what he wanted to say or do.

My husband and I are both educators, so we are perhaps more comfortable speaking our minds about issues regarding our children’s schooling. Even so, knowing MOST’s policy gave me extra confidence as we met with school officials. I printed it out and brought it along, just in case! Now, four years later, I am glad we had a say in our children’s classroom placements. I am also grateful for MOST’s research and family discussion forums which helped me become knowledgeable about the topic before we had to make and defend our decision. – Eileen Raff