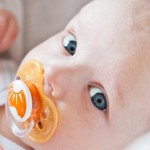 One of the things premature babies are given in neonatal intensive care units (NICU) are pacifiers. Pacifiers stimulate and strengthen the babies’ sucking power, which is essential to correct feeding, which is necessary for the babies’ discharge.

A recent study looked at the effect of pacifiers that played recorded versions of lullabies sung by babies’ mothers. They found that babies’ sucking on the pacifiers that played recorded lullabies — the recordings stopped playing when they stopped sucking — led to faster learning of the proper way to feed. “A mother’s voice is a powerful auditory cue,” said study author Dr. Nathalie Maitre, a professor of pediatrics at Vanderbilt University’s School of Medicine. “Babies know and love their mother’s voice. It has proven to be the perfect incentive to help motivate these babies.”

Maitre and her colleagues looked at 94 premature babies, all of whom were born between 34 and 36 weeks of gestation (about 40 weeks is full term), and were healthy except for being fed through a feeding tube. About half of the babies got the prerecorded pacifiers, which played either “Hush Little Baby” or “Snuggle Puppy,” for about 15 minutes each day. Whenever the babies sucked on the pacifiers, they heard their mothers singing.

Although the study only lasted about five days, the results were obvious. Babies who used the pacifiers were off the feeding tubes an average of a week earlier than those who had regular pacifiers. They also consumed more, drinking about two milliliters of fortified breast milk, compared to about one milliliter in the comparison group.

“Premature infants thrive in the home with earlier discharge, parents are relieved to have their babies home from the hospital as soon as possible, and medical costs are greatly reduced,” Jayne M. Standley, the inventor of the musical pacifier, called the PAL, told Reuters. “This study has implications to change NICU treatment for feeding problems of premature infants.”